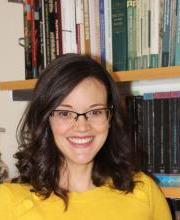 Allison Bigelow, Associate Professor of Spanish, holds a PhD in English from UNC-Chapel Hill (2012), was a postdoc in history at the College of William & Mary (2012-2014), and is an associate professor of colonial Latin America in the Department of Spanish, Italian, and Portuguese and the Program in Latin American Studies. Her first book, Mining Language: Racial Thinking, Indigenous Knowledge, and Colonial Metallurgy in the Early Modern Iberian World, was published by the Omohundro Institute of Early American History and Culture in Spring 2020. Her research on colonial science, Indigenous knowledges, and gender systems has been published in Anuario de estudios bolivianos, Early American Literature, Early American Studies, Ethnohistory, Journal of Extractive Industries and Society, and PMLA. As part of her next book project, she contributes to the Multepal Project at UVa, whose efforts currently focus on preparing a digital critical edition of the Maya K'iche' book of creation, the Popol Wuj.