The Andes and Machu Pichu 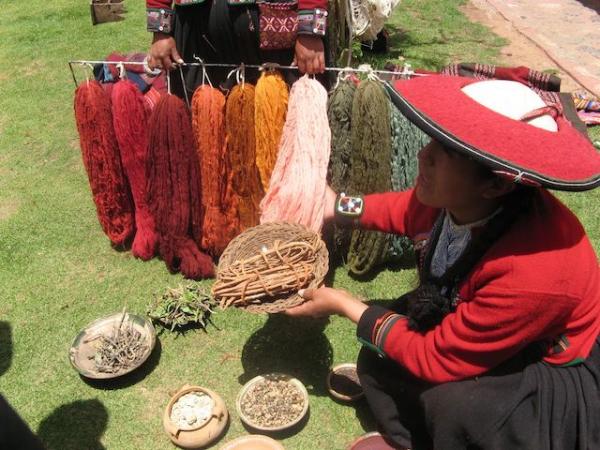 We visited a textile institute that preserves the old ways. The lady
here is showing us some of the natural products used to make dyes. 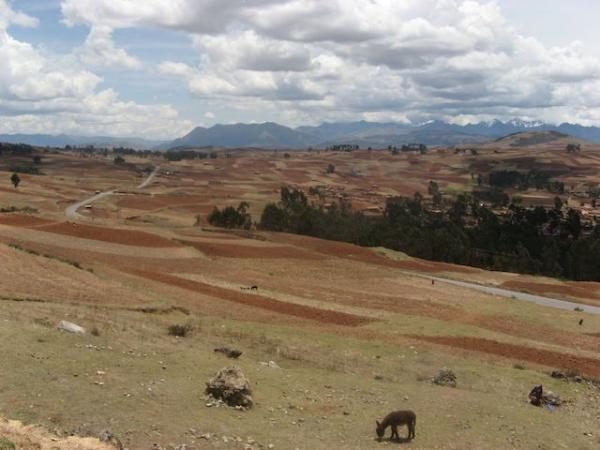 Potato fields being prepared for planting. Potatoes are a major crop
in Peru, and many varieties are grown. 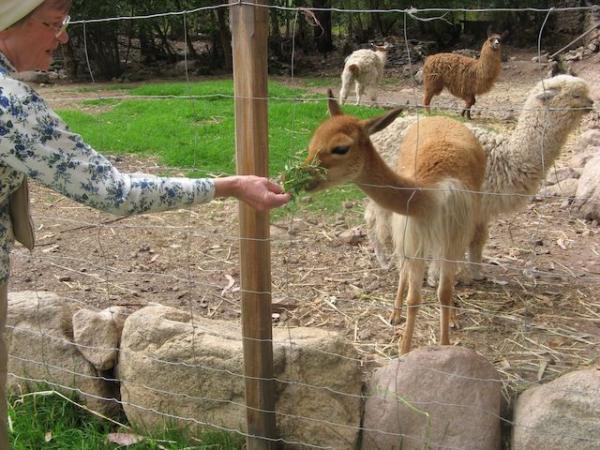 Feeding a young vicuña at one of our lunch stops. 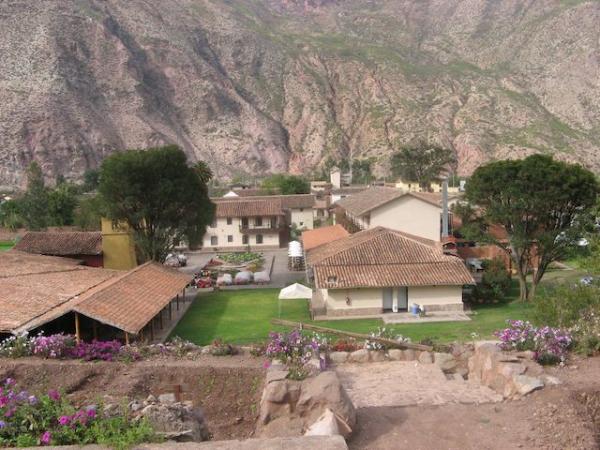 One of our hotels, converted from an old monastery. 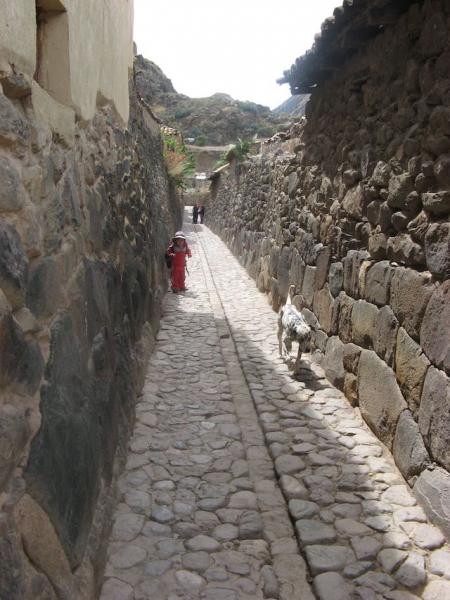 School child with knapsack in a village dating to Inca times. 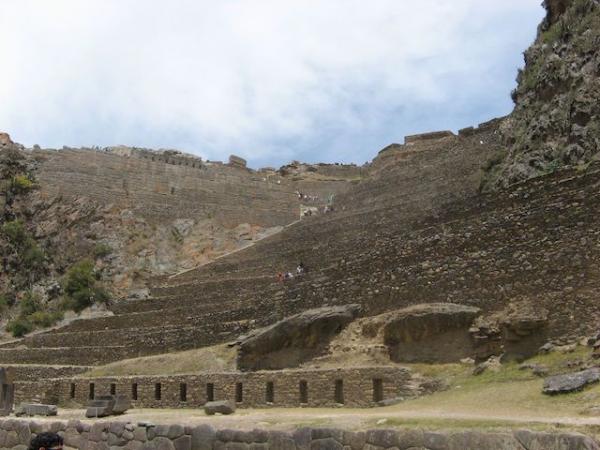 Inca ruins at Ollantaytambo. Our guide said he preferred this site to
Machu Picchu. We walked around the lower part but did not have time
to go up. 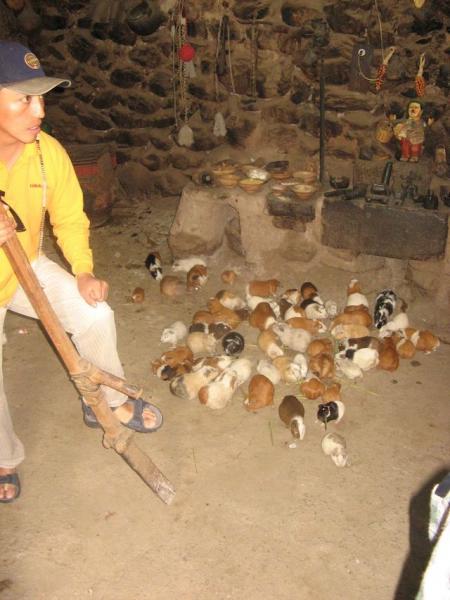 Inside a home in the village. The locals raise guinea pigs for food.
Our guide Ernesto is demonstrating a foot-plough. Before the Spanish
arrived, the Andeans had no work animals (horses, oxen, donkeys) and
plowed by hand. 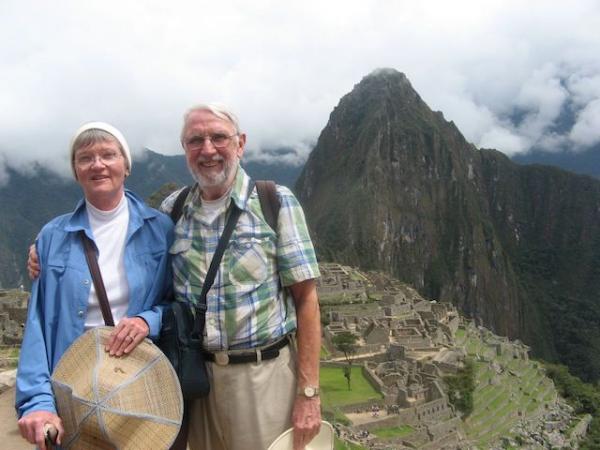 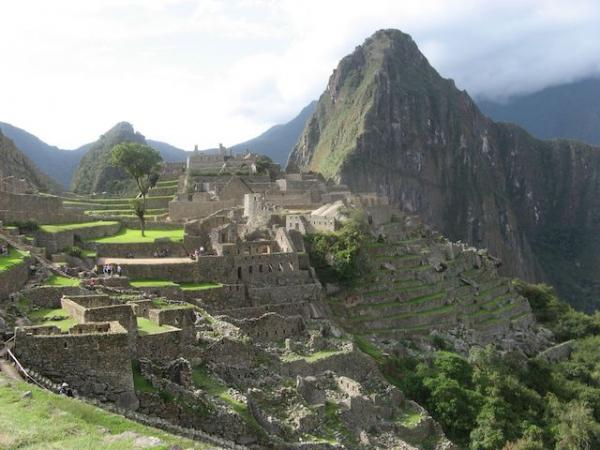 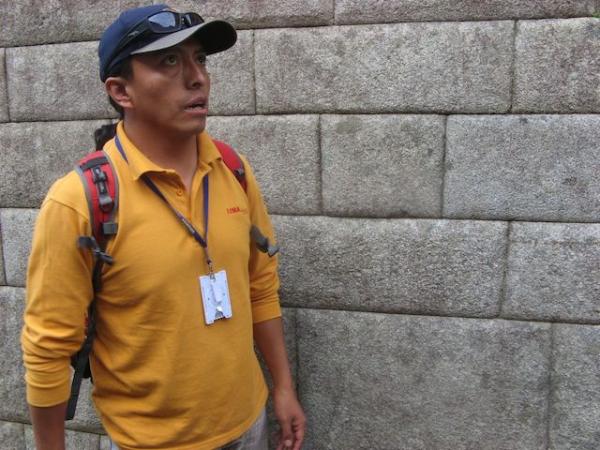 Our guide Ernesto, pointing out some exceptionally fine stone work,
which is found in the most important buildings at Machu Picchu, 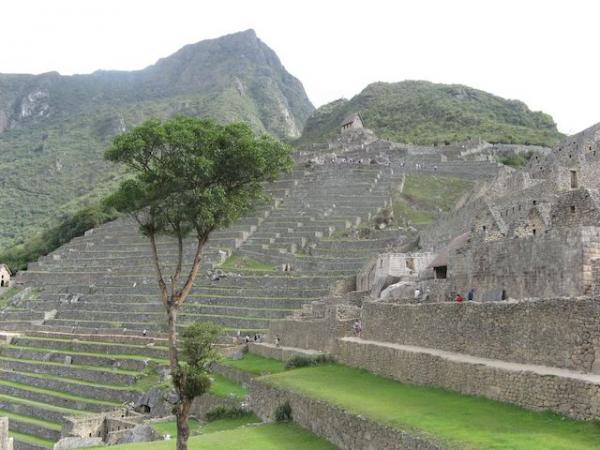 The high mountain peak in the background is named Machu Picchu.
We were told that the Machu Picchu ruins were named after the mountain. 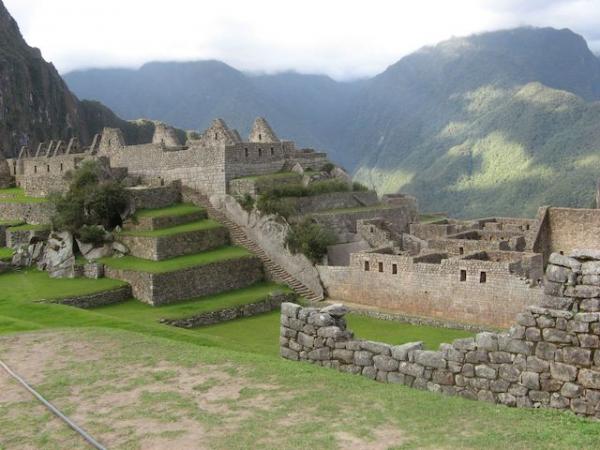 It is hard to resist taking pictures of Machu Picchu. 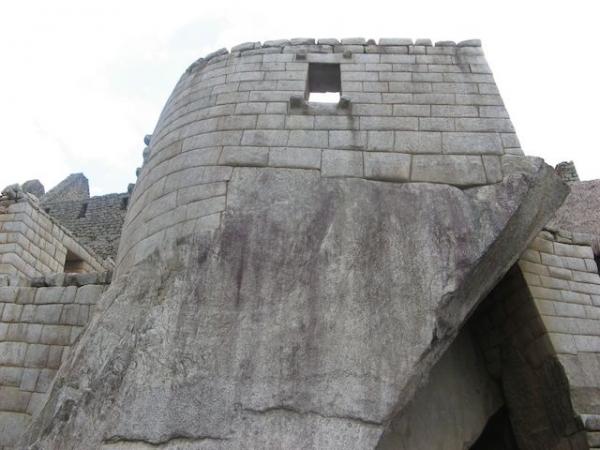 Temple of the sun. 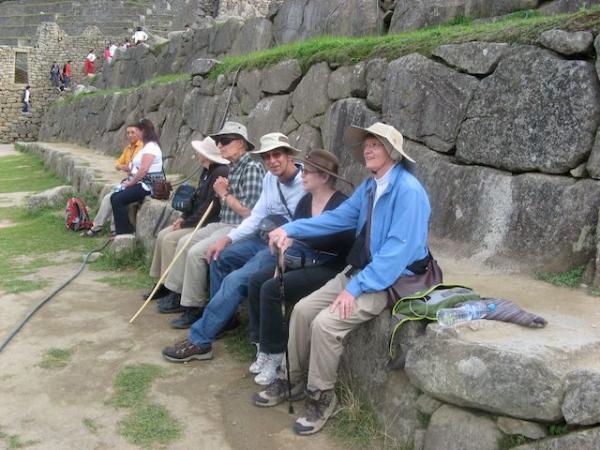 Taking a break. Next to Ginger are Eric and Jayne Fuglister. Eric
was a classmate of Ginger's at Swarthmore and also a math major. 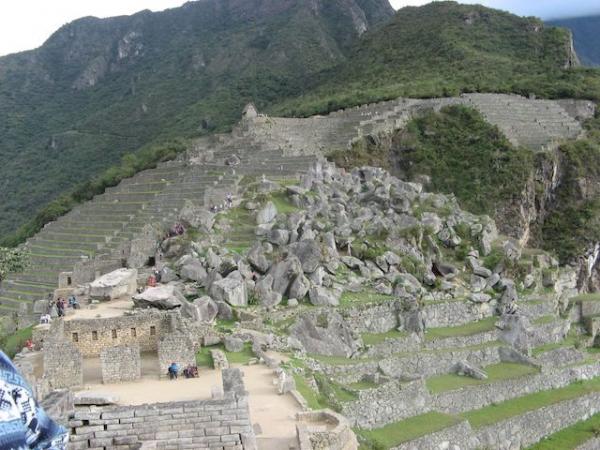 This is called the quarry. Machu Picchu was evidently a work in progress. 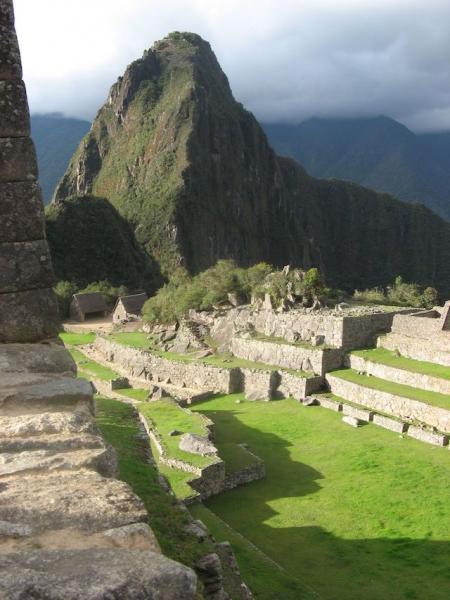 We did not wear sunglasses at Machu Picchu so as not to miss the rich colors.

The setting and play of sun and clouds against the surrounding
mountains are impossible to capture with photographs. 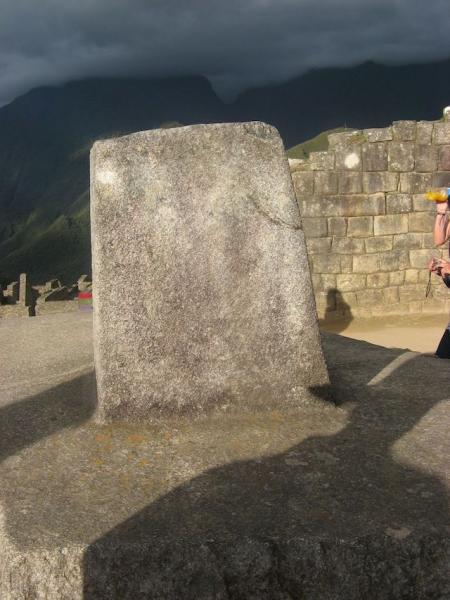 "Sundial" at Machu Picchu. The right side of the stone is cut at 13
degrees from the perpendicular. The sun at its highest point will
shine parallel to that side. Machu Picchu is located 13 degrees from
the equator. 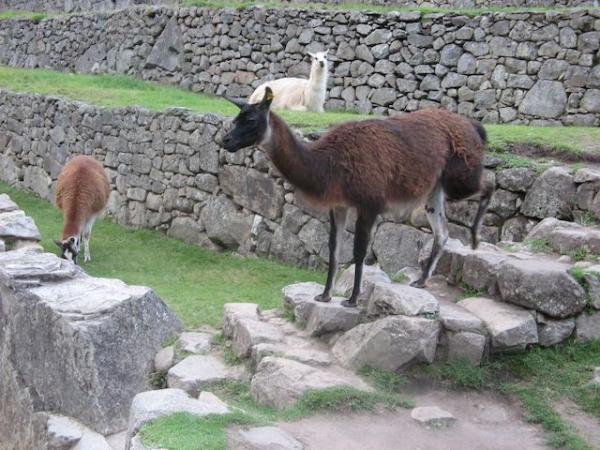 Wild Llamas (pronounced "yamas") roam throughout Machu Picchu. They
are not aggressive, but they have the reputation of spitting when
annoyed, so people do not mess with them. 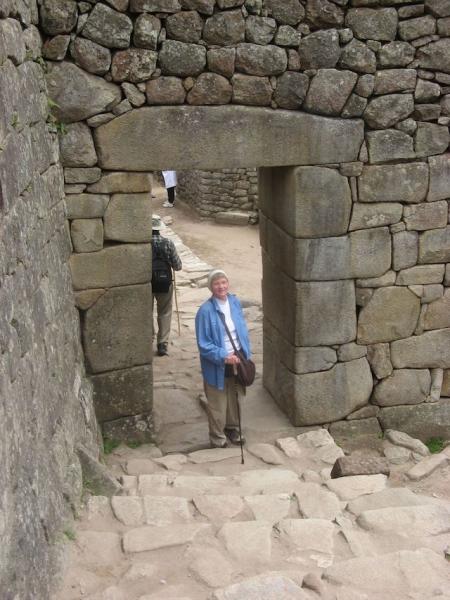 End of the Inca trail, and the entrance to Machu Picchu for Inca royalty. 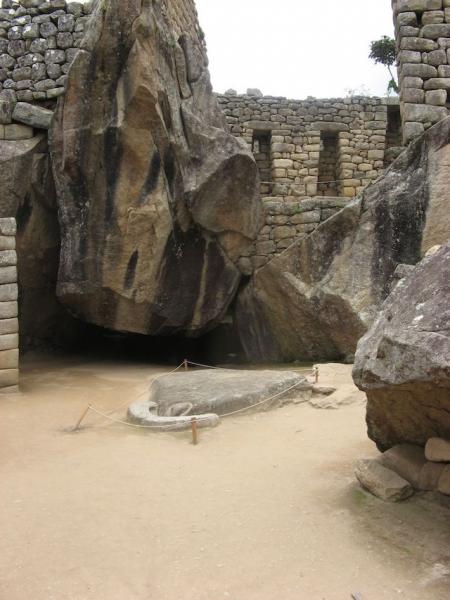 This is in Machu Picchu. The large flat stone surrounded by rope
represents a condor. The semicircular stone in front of the head
represents the collar of the Andean Condor. The large boulders
behind are thought to represent the wings of the condor. According to
our guide, the Incas believed that when they died, a condor would carry
their spirit to a mountain top, after which (we don't remember the exact
method) they would become part of the life-giving earth. Our guide
was pure Andean (no Spanish blood) and still adhered to the old
religion (only half of a percent of Peruvians still adhere to the old religion). 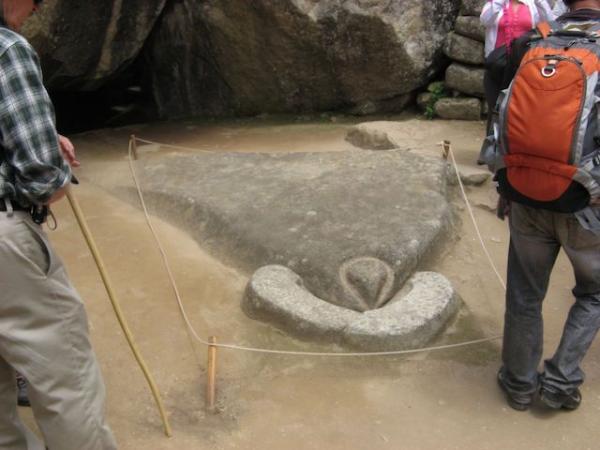 Close-up of the body of the condor. 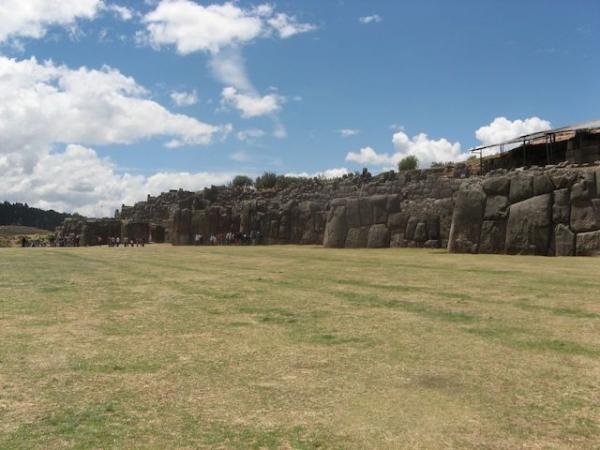 After we left Machu Picchu, we visited this massive Inca amphitheater,
called Sacsayhuamán. It was a site for religious and ceremonial
events. The jagged wall, built with huge stones, imitates lightning.
Some of the stones here are much larger and heavier than those of
Stonehenge. 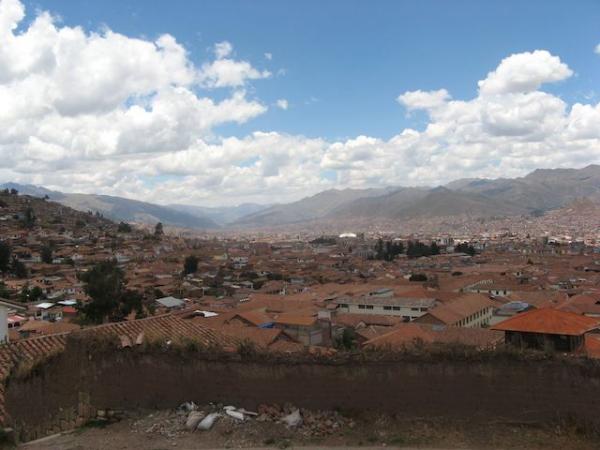 City of Cusco, elevation 11,200 feet. We felt mild discomfort due to
the altitude. The hotels keep oxygen for guests who find the altitude
a problem. We did not ask for any, but our tour director was feeling
bad and used oxygen both nights. 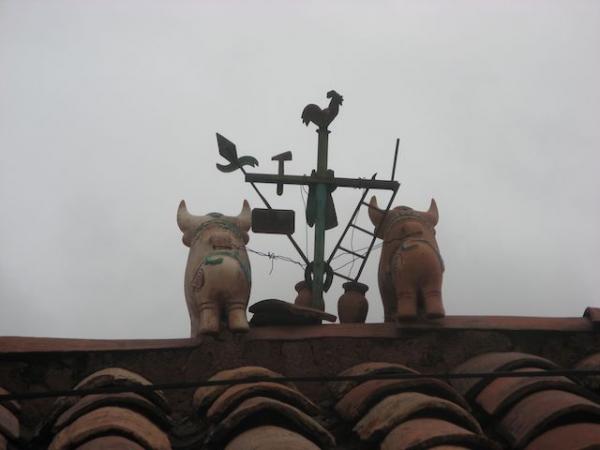 These small collections of symbols appeared on many roof ridges in the Andes.
They frequently combine the Christian cross with symbols of the earlier religion
for fertility of the soil and good harvest. They symbolize protection, prosperity,
health, and being blessed. A tile roof is an improvement over the traditional
thatched roof, and our guide said often the family's parents paid for the roof
and were "godparents" for the roof. 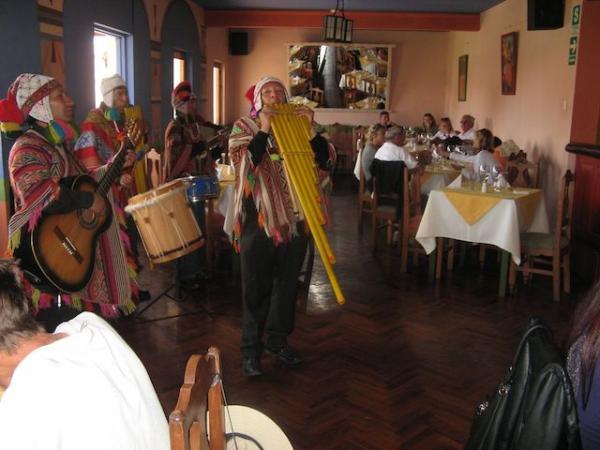 Farewell lunch, with traditional music and dancing. We saw many sets
of pipes in this style, though usually much smaller. It took a lot of
lung power to play this set.