Jungle of the Upper Amazon

We flew from Lima to Iquitos, an isolated community in the jungle.
The three-wheel vehicles here are called motocars. They are the main
means of transportation. There are very few large cars, as there are
very few roads that really go anywhere.

On a skiff to board our boat, La Amatista. 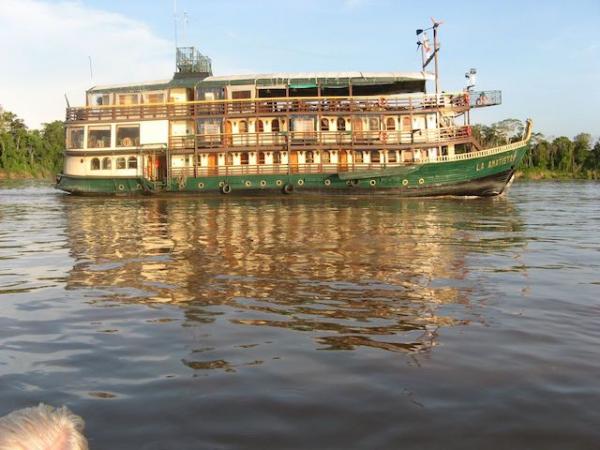 Our boat, La Amatista. We had the middle cabin on the lower level. 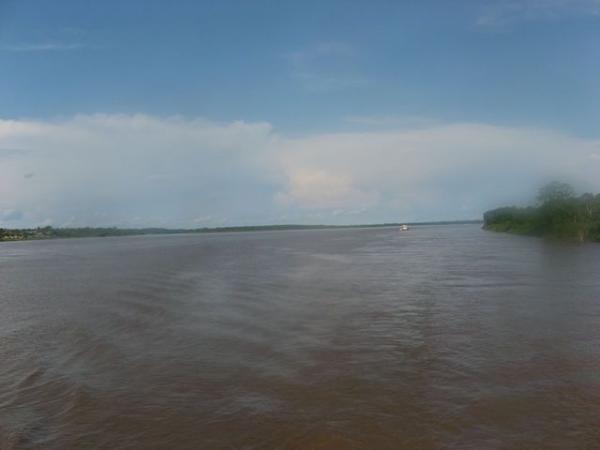 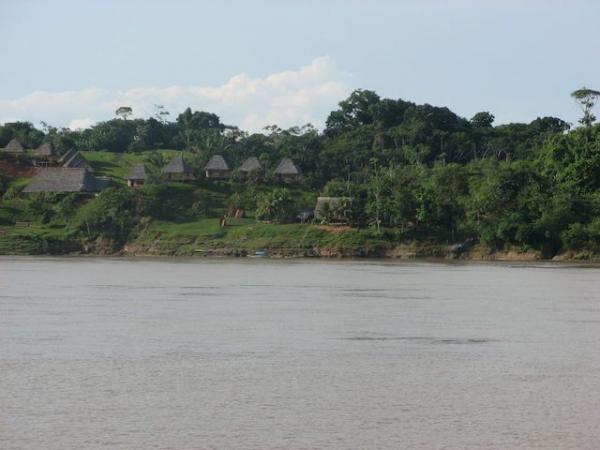 Cruising. Village on the Marañón. 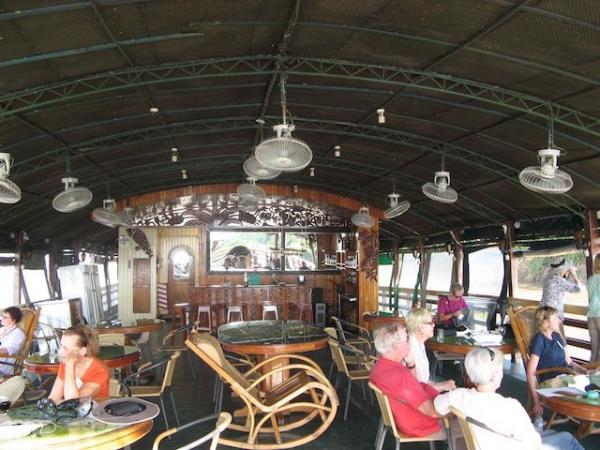 Lounge on the upper deck of La Amatista. Some of our companions. 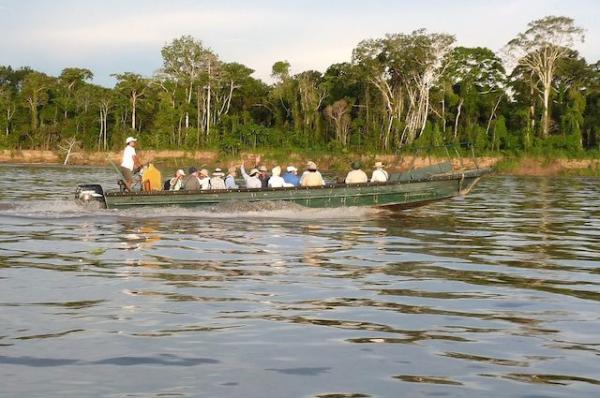 Every day we went on excursions in skiffs. Photo courtesy of the naturalists. 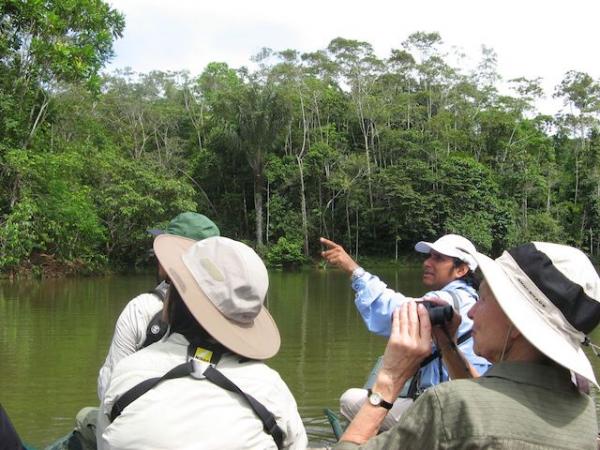 This is George, our favorite naturalist (blue shirt, pointing). He
had fantastic eyes to spot birds and wildlife, and he gave in-depth
explanations of what we were seeing. 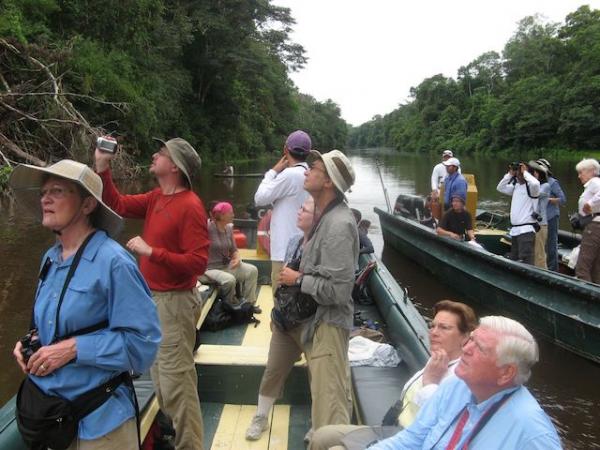 Typical scene. There were three naturalists on all of our outings.
One would spot something, and then we would strain to find it with our
binoculars. The excursions to view wildlife were highlights of the trip. 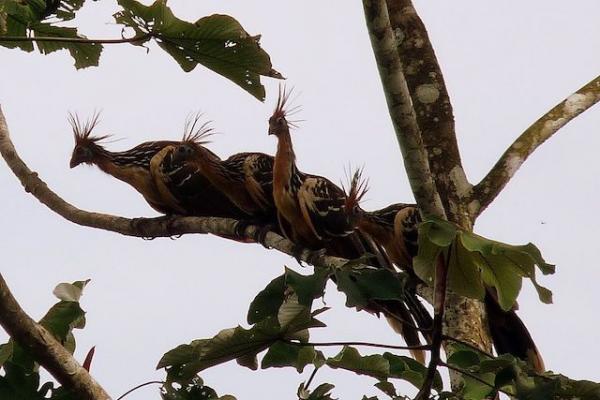 This photo was taken by one of our guides. It is the famous Hoatzin bird .
We also saw many parrots, parakeets, and other exotic birds. It
required good binoculars to properly see them. Our binoculars were
not fully up to the job, but they were helpful. 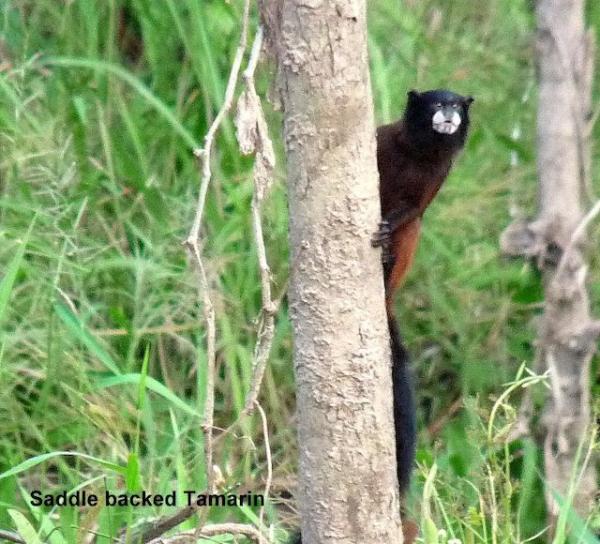 Saddle backed Tamarin monkey. Photo courtesy of the naturalists, who
were also good photographers and could zoom in and capture colors.
They kept records of all of the wildlife that we saw and gave us a
list at the end of our week in the jungle. 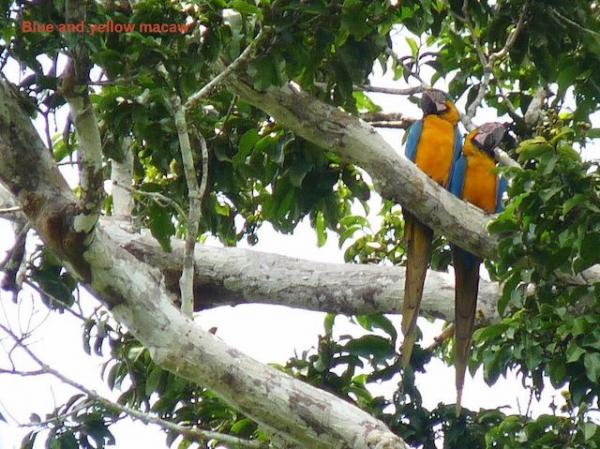 Blue and Yellow Macaws. Photo courtesy of the naturalists. 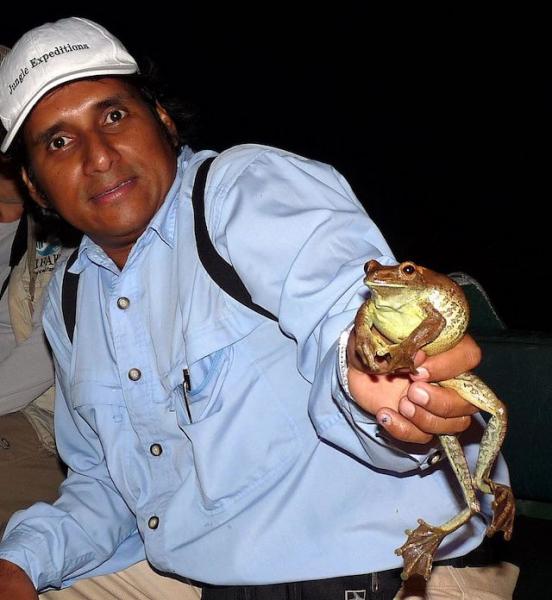 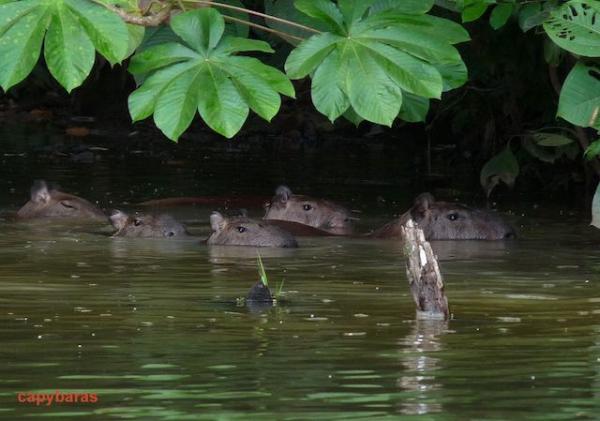 A family of Capybaras. These are the world's largest rodents. We saw
one out of the water. My first thought was that it was some kind of
wild pig. Photo courtesy of the naturalists. 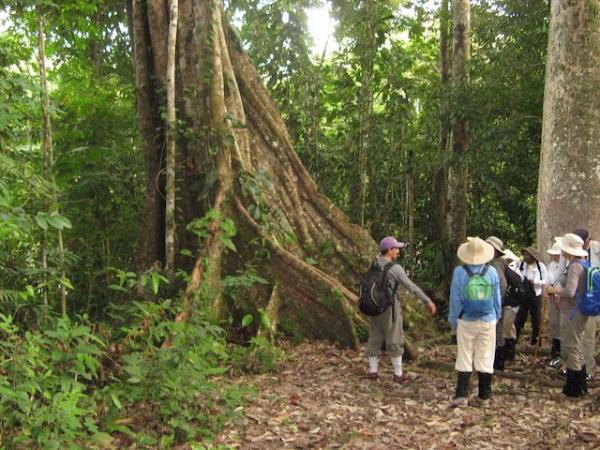 Characteristic root system for many trees in the jungle. The soil is
shallow, and the roots flair out for stability. Standing in the
purple baseball cap is Robinson, another naturalist. Ginger has her
back to the camera in a blue shirt. Here we are hiking to a camp
for an overnight stay in a tent in the jungle. 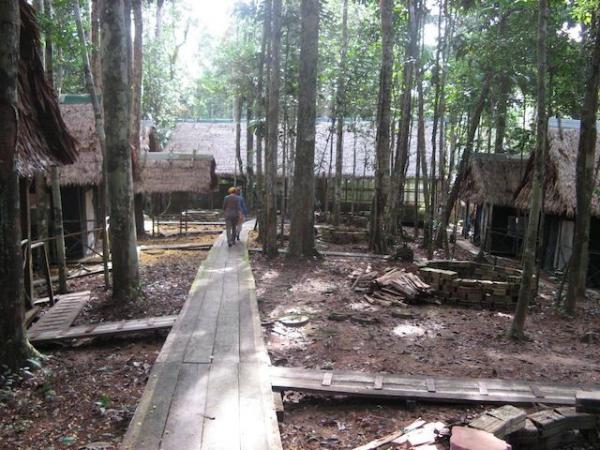 We spent a night here. The "cabins" are tents with a thatched roof
over them. Our guides built blazing fires in the circular fireplaces
to scare off the jaguars and pumas (they claimed to hear some in the
night). The staff cooked a hot meal for us in the evening. We took a
night walk with flashlights, but we did not see much, probably because
it was a relatively large group making too much noise. 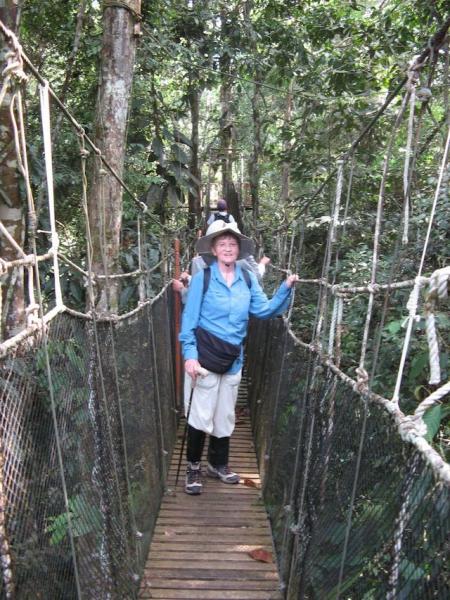 Ginger on a canopy walk. Much of the wildlife lives high in the
canopy of the forest, which has a separate environment. Walkways like
this are designed to take people into this environment and give access
to other wildlife. 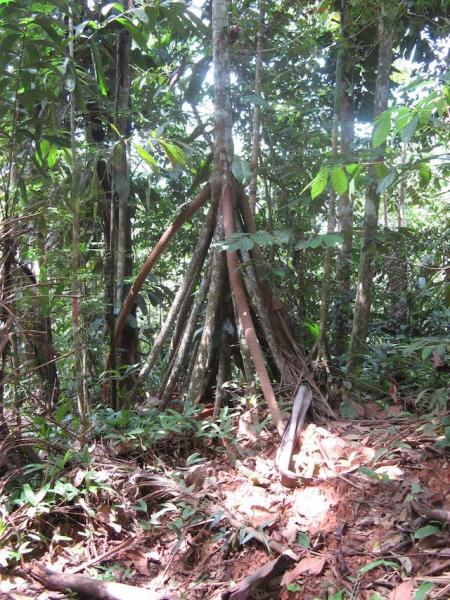 Walking tree. This tree sets down roots in directions that it views
as favorable, and so to some degree it can change its location. 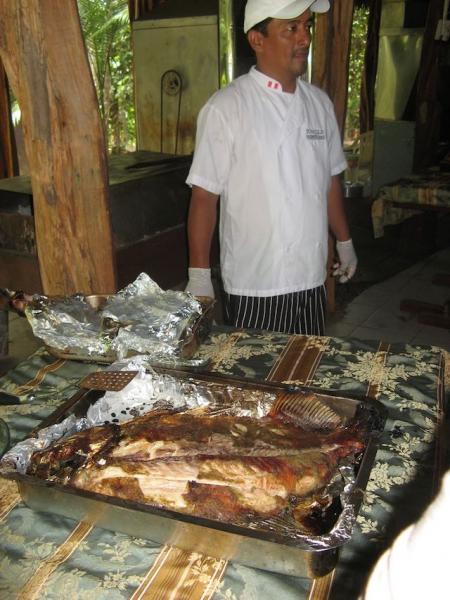 This is a vegetation-eating piranha that we had for lunch on our
return from the overnight in the jungle. 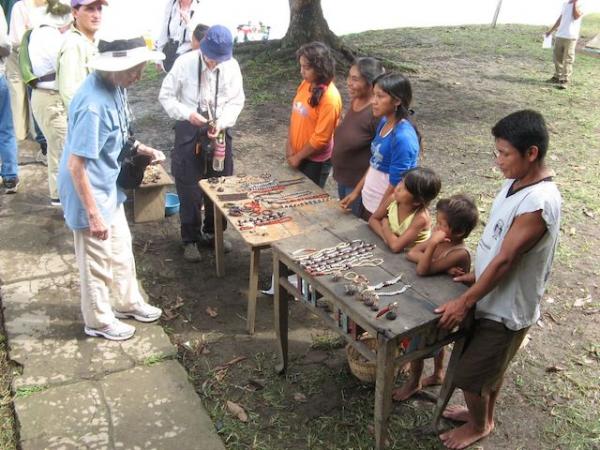 The local people sold items like these everywhere we went. We have a
number of souvenirs. 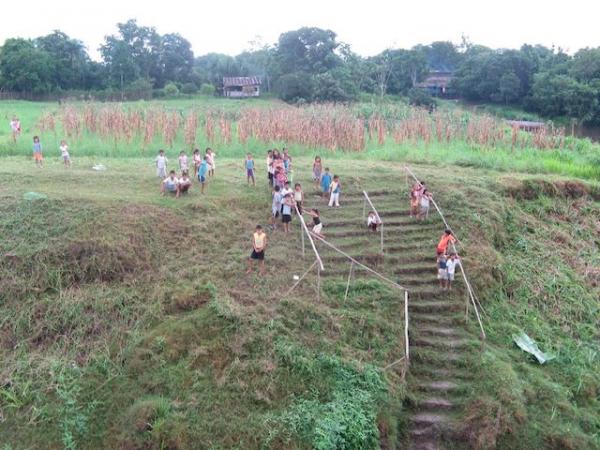 We visited a village named Amazonas near Nauta. The people did not
know we would stop until a few hours before. The children waited and
watched for us to disembark. 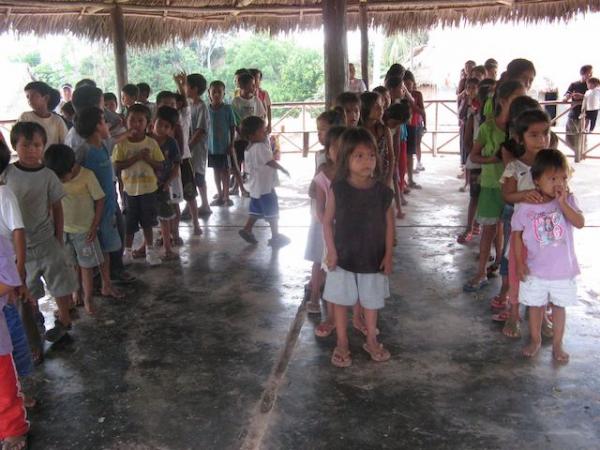 We spent an hour interacting with the children, led by our amazing
naturalist, George. He got the children to sing songs, and each one
said his/her name, and then we had to sing a song for them. At the
end we were provided with small gifts like pencils, notebooks, and
toothbrushes, and we all waded into the group of 80 children and tried
to see that each one got something. A trip highlight. 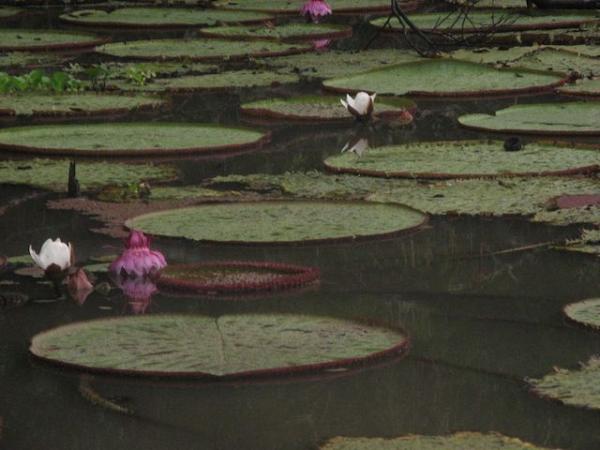 Giant lily pads. These are prized items in botanical gardens. They
are able survive only in a very narrow set of circumstances. Our
naturalist George explained how they are also critically dependent on
a highly specialized beetle for fertilization. It rained the day we
went to see these and we got muddy and wet, but it was a rare
opportunity to see them in their natural habitat. 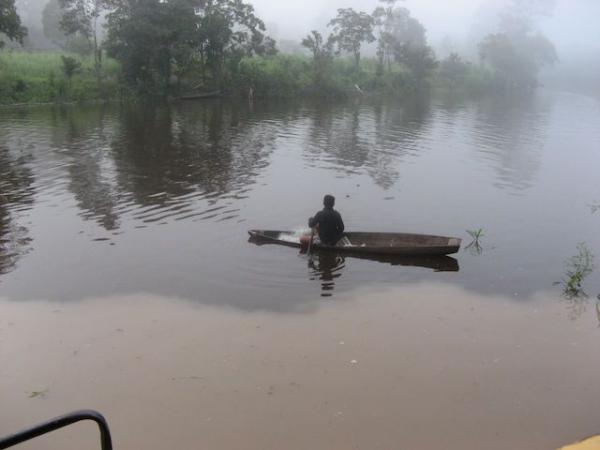 Man fishing in the early hours of the morning. Note the color of the
water in the foreground. This is "white water", which contains mud
particles. The man is fishing at a point where a "black water" stream
is entering the main river. The "black water" gets its character from
decaying vegetation. 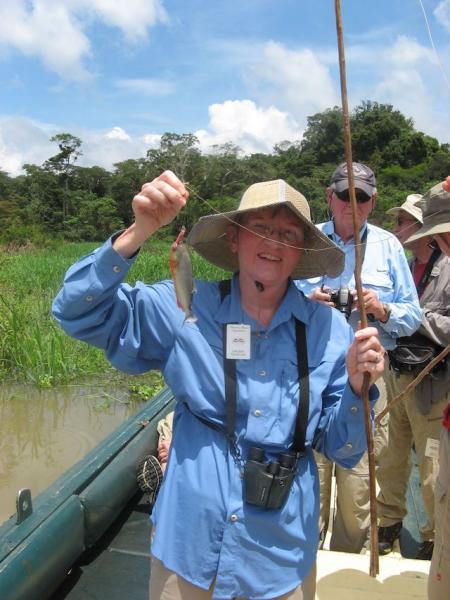 Piranha fishing. Ginger caught the first one. We caught a bunch and
the crew cooked them for dinner. These piranha do indeed have sharp
teeth, but the tales about piranha eating people alive is only in the
movies, so we were told.