Dr. Lillard's book Montessori: The Science Behind the Genius is now an audiobook on audiobooks.com!

Dr. Lillard was interviewed by Jesse McCarthy for MontessoriEducation.com's podcast! Check it out here.

Dr. Lillard published an opinion piece in The Dallas Morning News titled When so many school children can't read, it's time to do something different. Read it here!

Dr. Lillard will be speaking at the Montessori Public Policy Initiative Conference. Her talk is titled Research to Information your Advocacy and will be from 2:15-3:30 ET on Saturday, October 3. Learn more here! 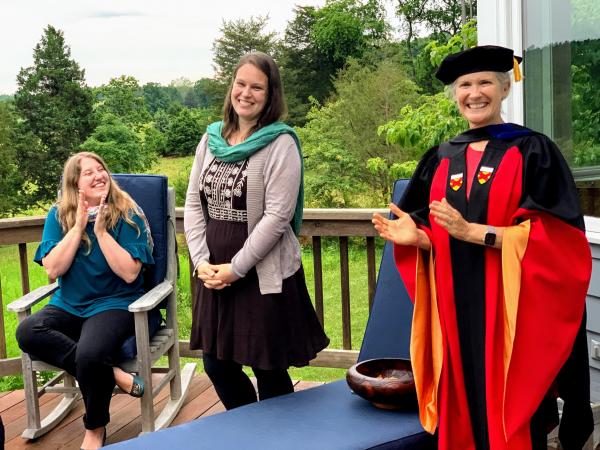 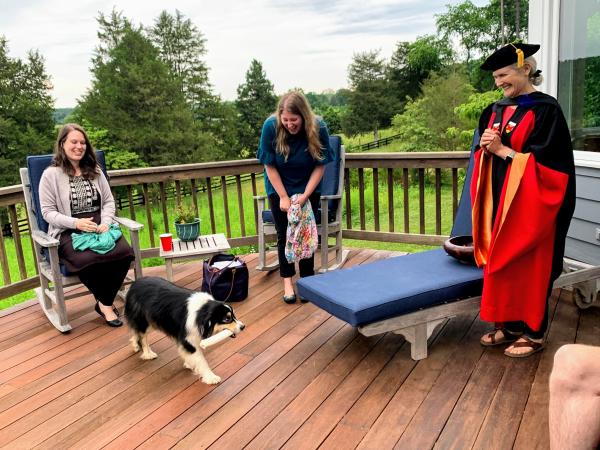 Dr. Lillard's book Montessori: The Science Behind the Genius has been selected by Recorded Books to become an audiobook! Learn more about the book here, and check back for updates about its release as an audiobook!

Dr. Lillard wrote a commentary for Child & Family blog about "lockdown learning" during the COVID-19 crisis. Read it here!

Dr. Lillard spoke at the AMI conference in Mexico City.

Dr. Lillard's article "Shunned and Admired: Montessori, Self-Determination, and a Case for Radical School Reform" was featured in Springer Nature 2019 Highlights as the second most highly viewed article of the year!

Our lab's latest article "What Shall We Do: Pretend or Real? Preschoolers' Choices and Parents' Perceptions" was published today! You can read it here. 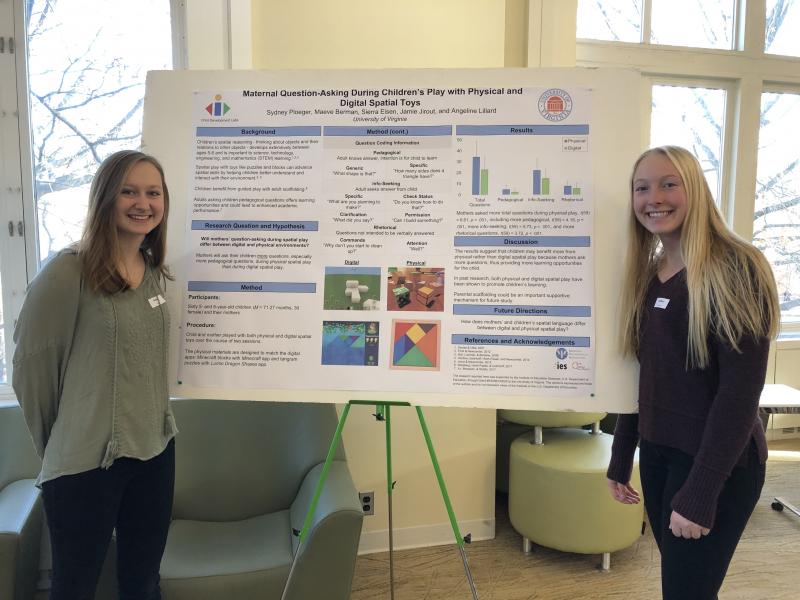 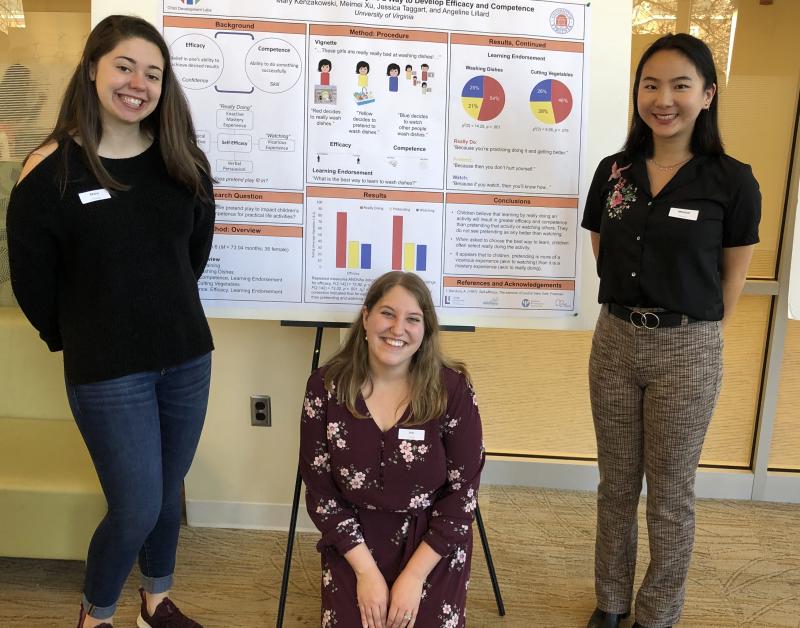 Mary and Meimei (with their mentor, Jess) presetend their poster: Children's Perceptions of Pretend Play as a Way to Develop Efficacy and Competence 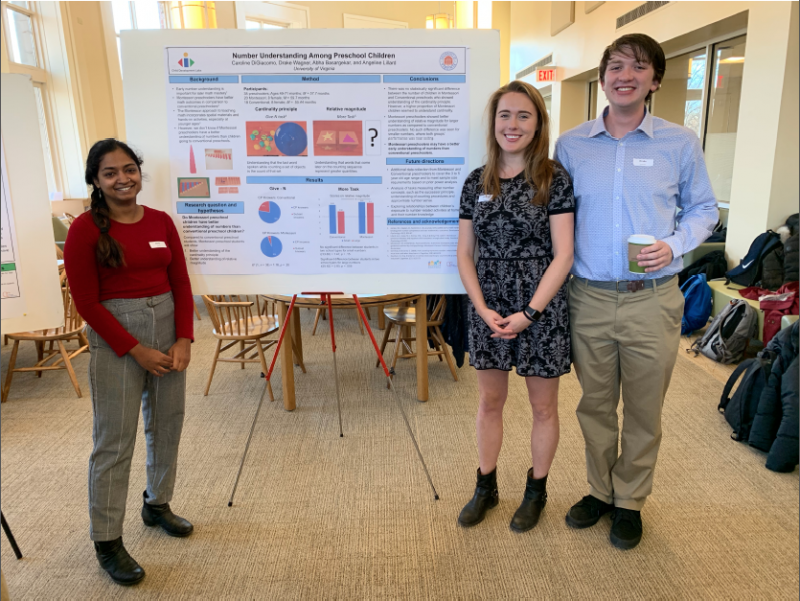 Drake and Caroline (with their mentor, Abha) presented their poster: Number Understanding Among Preschool Children 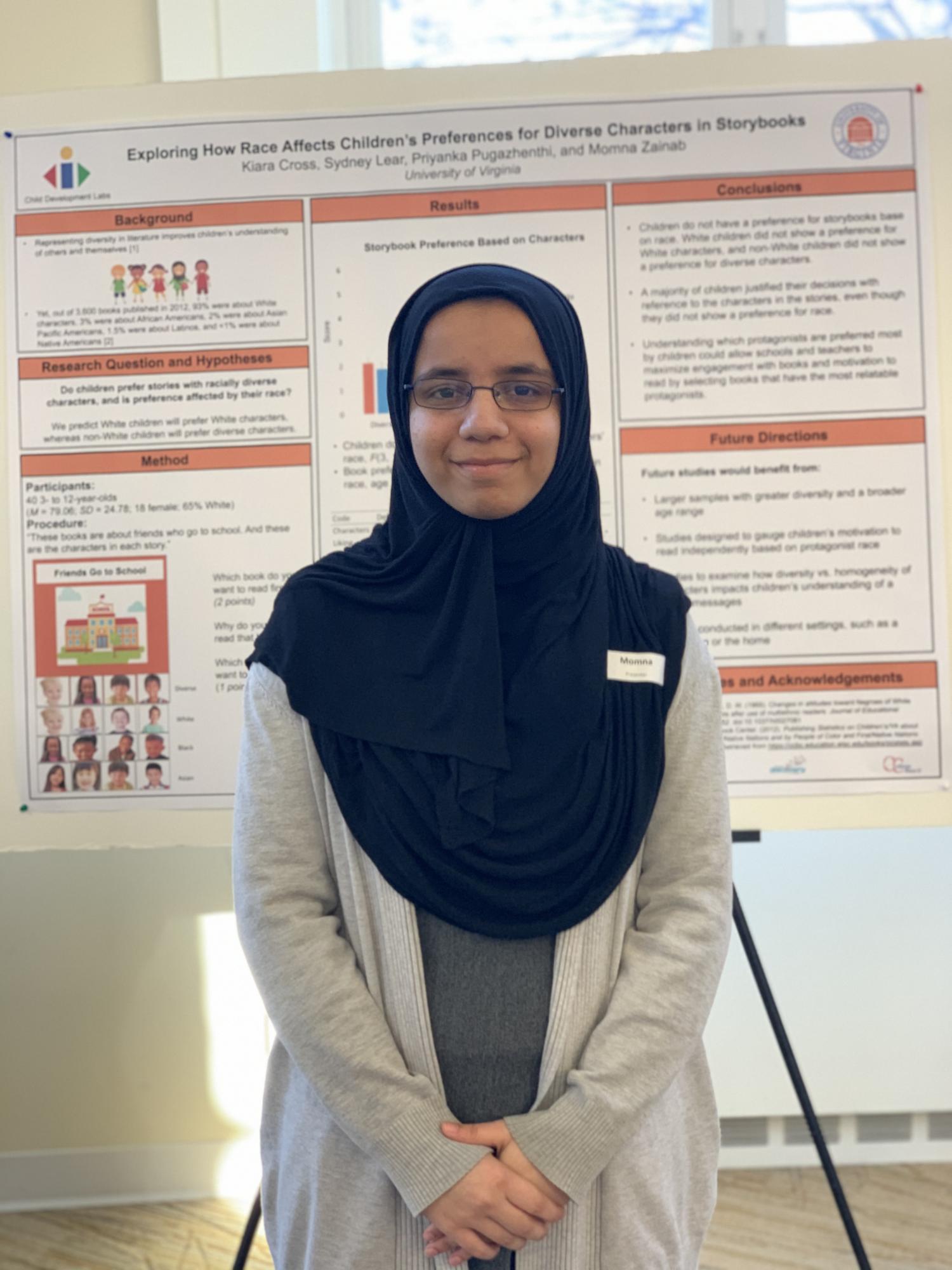 Dr. Lillard was interviewed recently by Linda Geddes for an article on children's television: This is why children's TV is so weird - and so mesmerising

Dr. Lillard spoke at the German Society of Psychology Joint Conference of the Divisions for Educational and Developmental Psychology in Leipzig.

Dr. Lillard spoke at the 100th Anniversary of Montessori in the United Kingdom.

Dr. Lillard was cited in a recent media article on the impact of Montessori education: A Public School Makes the Case for 'Montessori for All' Edutopia, April 25, 2019.

The Early Development Lab said "goodbye" to their lab coordinator, Eren Fukuda, and "hello" to their new one, Allyson Snyder. Post-doc, Dermina Vasc made traditional Romanian food for the occassion.

Post doc Dermina Vasc organized an Undergraduate Research Conference where undergraduate students involved in developmental psychology research in the department presented their projects. Some of our very own research assistants participated as well!

Rana presented her poster titled "How to Wash a Table: Montessori Teaching in the Lab" with her mentor Dermina

Hyerin presented her poster: "The Role of Mothers in Children's Physical and Digital Spatial Play" with her graduate student mentor Sierra

Dr. Lillard was interviewed by Michele Molnar from EdWeek Market Brief, and was quoted in the following article about the announcement from Amazon CEO Jeff Bezos that he is contributing $2 billion to start "Montessori-inspired preschools in underserved communities": "Amazon's Jeff Bezos Announces $2 Billion Philanthropic Fund for Preschools, Homeless Families" EdWeek Market Brief, September 13, 2018

Dr. Lillard, along with Dr. Ann-Marie Faria and Ms. Karen Manship at the American Institutes for Research, received funding from the Institute of Education Sciences to conduct the first federally-funded study devoted to Montessori education. Click here to read more!

Dr. Lillard spoke to the Canadian Council of Montessori Administrators in Toronto.

The Early Development Lab members celebrated the end of another productive year! Thank you to all the families and schools that have participated in our studies, and we look forward to the exciting new studies we are running this summer and beyond!

Dr. Lillard spoke as a keynote speaker at the Association Montessori Internationale (AMI) 2018 in Amsterdam, and spoke to teacher trainers in the Annual General Meeting. 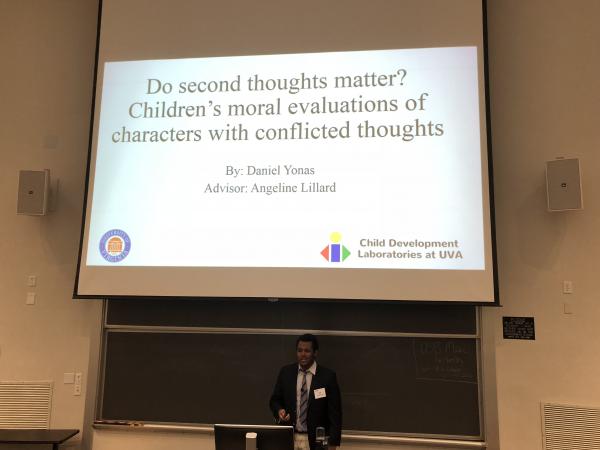 Meghan presented her poster titled "Shall We Pretend? Parents Ask More Questions and Take on Different Roles During Pretend Versus Real Interactions with Children" 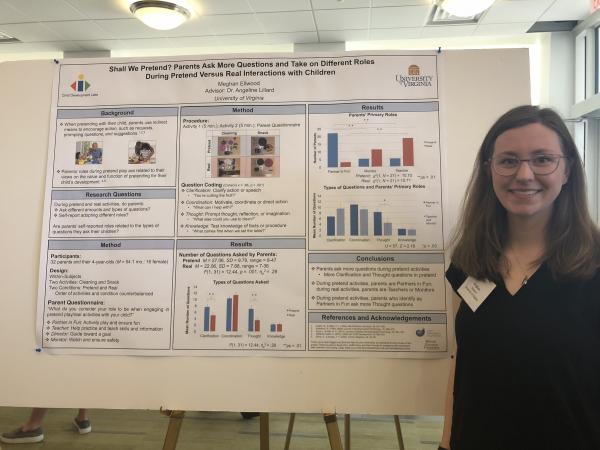 Dr. Lillard attended the American Montessori Society Conference in Denver. She spoke as a Keynote Speaker at the Teacher Trainer preconference on March 21st, and had a presentation and book sigining on the other days.

The 2017 study by graduate student Jess Taggart, former laboratory coordinator MJ Heise, and Dr. Lillardshowing that children prefer to do actual activities rather than their pretend counterparts has been picked up by more media outlets:

More media outlets have mentioned this study in 2018:

Dr. Lillard was interviewed by Bob Greenberg from The Brainwaves Video Anthology. View her talk about Montessori education below! You can also click here to hear her talk about how her fifth-grade teacher made a difference in her education.

Dr. Lillard spoke at two locations in the Washington DC area -the Crossway Montessori in Kensington, Maryland, and the AMI Training Center at Loyola University.

Dr. Lillard spoke as a Keynote Speaker at the AMI-China Conference in Hangzhou.

A longitudinal Montessori study conducted by Megan J. Heise, Eve Richey, Xin Tong, Alyssa Hart, Paige Bray, and Dr. Lillard, Montessori elevates and equalizes child outcomes: A longitudinal study, is now on Frontiers in Psychology!
After this article was published, the study got picked up by numerous media outlets:

Dr. Lillard was awarded grants from the LEGO Foundation and the Wildflower Foundation, respectively.

Graduate student Jessica Taggart and Dr. Lillard were awarded a grant from the American Montessori Society to study how pretend and real activities affect children in Montessori classrooms! Read more about their research on Our Research page.

Dr. Lillard's article Why do the children (pretend) play? is now in press in Trends in Cognitive Sciences.

Former student Lili Ma, now a professor at Ryerson University, and Dr. Lillard published a new article examining how two-year-olds' interpretation of behavioral cues in pretend play. You can read the article here.

Dr. Lillard was a Keynote Speaker at the 28th International Montessori Congress in Prague!

Graduate student Jess Taggart, laboratory coordinator MJ Heise, and Dr. Lillard found that children prefer to do actual activities rather than their pretend counterparts. Read about their findings in Developmental Science.
After this article was published, the study got picked up by media outlets:

Dr. Lillard was invited to speak as a Keynote Speaker at at Montessori Asia Conference in Hong Kong! 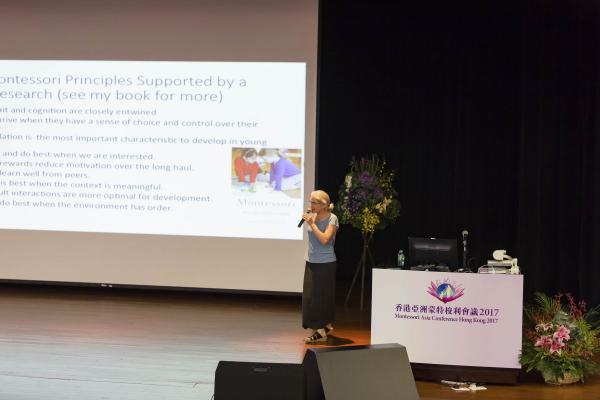 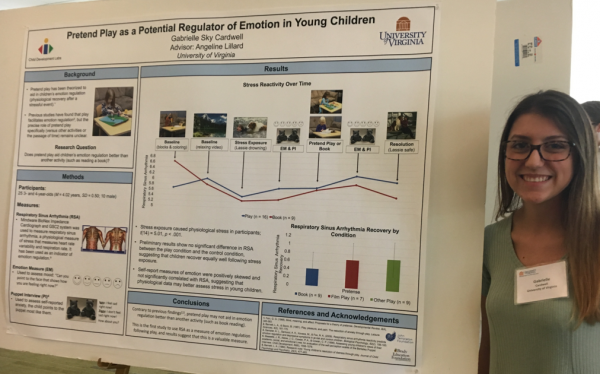 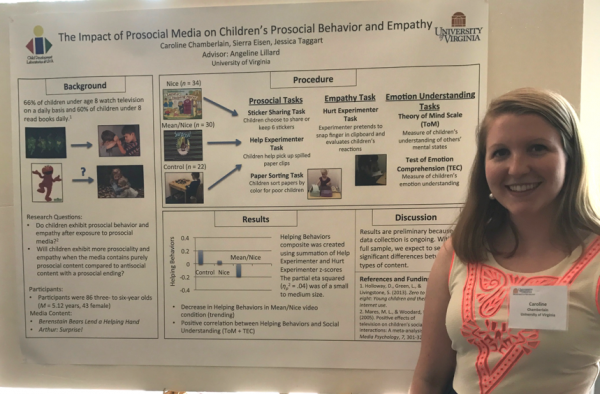 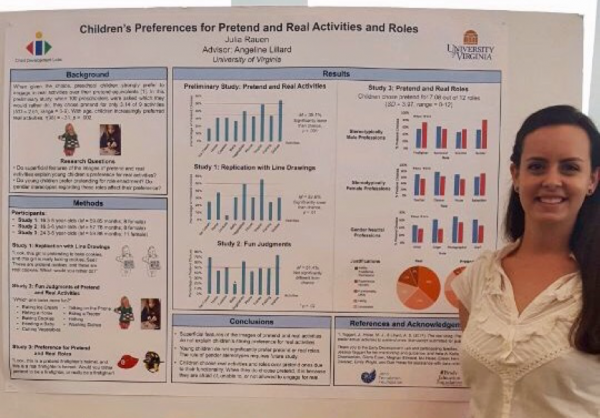 Former graduate students Rebecca Dore and Eric Smith have published findings illustrating that children adopt the traits of a character that they have read about in a story.

Dr. Lillard was a Keynote Speaker at the Hsin Yi Early Childhood Conference in Taipei, Taiwan on early childhood education.

When do children begin pretending to use bananas as telephones? This game is actually an illustration of a child's ability to separate the meaning of an object from the physical item. Dr. Lillard and colleagues recently published an article on children's understanding of object pretense in the Journal of Cognition and Development. Link to PDF

Graduate student Sierra Eisen was awarded a grant from the American Montessori Society to study how children learn from apps compared with hands-on materials. Thanks to all the children and families who have participated in her research!

Congratulations to Rebecca Dore, who successfully defended her dissertation this week! This fall, Rebecca will be beginning an Institute for Education Sciences post-doctoral position in the lab of Roberta Golinkoff at the University of Delaware. Thanks to all the families who participated in her research!

Media mention: "This Is When Racial Bias Begins To Impact A Child's Empathy For Pain, Study Suggests." Huffington Post, March 4, 2014

Media mention: "If you are reading this article, your kid probably doesn't need preschool." Slate, January 16, 2013.

Media mention: "Pretend play may not drive child development as much as once thought." APA Monitor, December 2012.