My research group focuses on atmospheric dynamics and their role in variability and long-term change in the climate system.  In our research, we explore key questions about the dynamics of the climate system through statistical analyses of intraseasonal, interannual, and decadal variability in observational data sets and climate model output.  Recent research topics have centered around the following themes: 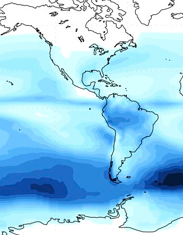 Clouds are an essential component to understanding day-to-day weather, but because they cover a substantial fraction of the globe, they also play an important role in our planet’s radiative budget.  Clouds absorb infrared radiation emitted from Earth’s surface and reflect incoming solar radiation.  As the position of weather systems vary and change over time, systematic changes in cloud patterns occur.  It is only beginning to be understood how these changes in dynamics and cloud cover impact the radiative budget and temperature distribution of our planet. 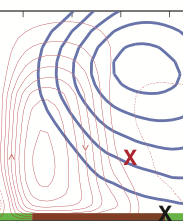 With increasing greenhouse gases in our atmosphere, computer models project that the atmospheric circulation will change in several notable ways throughout the 21st century.  The Hadley circulation, the large-scale atmospheric circulation in the tropics, is projected to widen, pushing arid subtropical regions further poleward.  Likewise, regions of heavy precipitation associated with the mid-latitude jet streams are also projected to shift poleward.  Systematic changes in these global-scale precipitation features are likely to have large societal implications, but the mechanisms underlying these changes remain poorly understood.  Current research focuses on developing a better understanding of these mechanisms, in order to reduce the uncertainty in future climate projections. 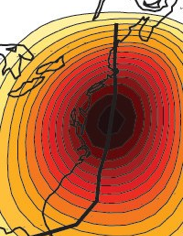 Storm tracks refer to the preferred position of the extratropical cyclones that govern much of the everyday weather at mid-latitudes.  Over eastern North America, the extratropical cyclones preferentially form east of the Rocky Mountains and track toward the Great Lakes and Atlantic coast.  Yet, the storm tracks vary widely from month to month and from year to year.  The tracks, formation regions, and strength of the individual storms are significantly altered by the El Niño-Southern Oscillation and the North Atlantic Oscillation.  Current research largely focuses on how the storm tracks change on decadal timescales and in association with various computer model simulations of future climate changes.