I study mathematics, specializing in Algebra, Arithmetic Geometry, Combinatorics and Number Theory. I am the STEM Advisor to the Provost and the Marvin Rosenblum Professor of Mathematics at the University of Virginia (UVa). I also am a College Faculty Fellow and a Fellow of the Shannon Center for Advanced Studies at UVa. I am an Honorary Professor at the Indian Institute of Technology (Guwahati), and also an Honorary Professor of the Mathematical Sciences Institute Belgavi in Karnataka, India (near Goa).

I am actively involved in mentoring mathematicians of all ages.  At the undergraduate level, I have been organizing REU programs for 25 years. I have mentored 8 Morgan Prize winners, 8 Schafer Prize winners, and 2 Rhodes Scholars. I have advised 32 Ph.D. students and 17 postdocs. Outside the traditional university setting, I am the Founder and Director of the Spirit of Ramanujan Global STEM Talent Search that supports emerging engineers, mathematicians, and scientists who lack traditional institutional support through financial grants and mentorship opportunities.To date we have made awards to 89 budding scientists from 17 countries around the world.

My professional service has included leadership roles in various professional societies, such as Vice President of the American Mathematical Society, Chair of the Mathematics Section of the American Association for the Advancement of Science, member of the U.S. National Committee for Mathematics at the National Academy of Sciences, member of the advisory board of the Conference Board of the Mathematical Sciences, Chairman of the UVa Department of Mathematics, and U.S. delegate to the General Assembly of the International Mathematics Union. I am on the Board of Trustees of the Association of Members of the Institute for Advanced Study.

Outside academia, I have a footprint in film and sports. I was an Associate Producer of the Hollywood film The Man Who Knew Infinity, which starred Dev Patel (Ramanujan) and Jeremy Irons (G. H. Hardy). I am a member of the board of the Infinity Arts Foundation.  Building on my lifelong interest in Olympic sports, I am a technical consultant for elite swimmers, having advised multiple NCAA national champions, Olympic medalists, and world champions. 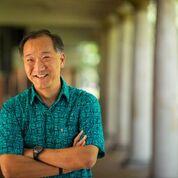 I spend much of my spare time outdoors with my family. I enjoy surfing, SCUBA diving, cycling, running, and swimming. I was formerly a member of the Timex-Trek Factory Triathlon Team (2014-2018), and I have represented Team USA in the 2012, 2013, and 2014 ITU World Cross Triathlon Championship. In the 1980s I raced bicycles.