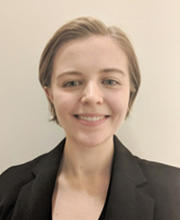 Frances is a historian of the revolutionary Atlantic, with a focus on slavery, abolition, and diaspora in the age of emancipation. Her dissertation, tentatively titled “‘In a State of Flight’: The Struggle for Freedom in the Haitian Diaspora, 1791-1830,” examines the experiences of hundreds of individuals who were transported as slaves from revolutionary Haiti to the early United States. Their journeys, and subsequent attempts to achieve legal and extralegal freedom, raise pressing questions about the connections between slavery, revolution, forced movement, and the law in the revolutionary Atlantic. Drawing on runaway advertisements and legal records, her dissertation uncovers the processes by which enslaved people traveled from revolutionary Haiti, their struggles to achieve legal and extralegal freedom once in the U.S, and the role of family and community relationships in these struggles. Frances’s work has been supported by the Omohundro Institute, the Folger Institute, and the Reves Center for International Studies. She is currently a Pre-doctoral Fellow at the Carter G. Woodson Institute for African-American and African Studies at the University of Virginia.