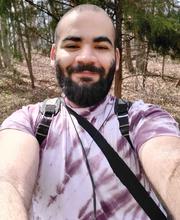 Ahmad was born in a small town south of Cairo, Egypt. He first moved to the US when his dad got accepted to a PhD program at Virginia Tech. When the student visa from VT ran out, Ahmad and his family moved to the United Arab Emirates where he completed high school. Four years later the US decided they made a mistake kicking Ahmad and his family out of the country and awarded them the green card lottery. As a child, Ahmad was brainwashed by educational programming on PBS because his family couldn't afford cable. A steady diet of Magic School Bus and Bill Nye convinced him that being a scientist was actually a good idea. Ahmad completed his undergraduate degree in Psychology at George Mason University. He became interested in neuroscience as a research assistant in a molecular biology lab creating fluorescent plasmids. There, he learned that studying cells is easier than studying people and decided to go the path of least resistance. Although Ahmad knew he wanted to pursue a PhD in neuroscience, he didn't want to be a broke graduate student. So he worked as a research technician at Janelia Research Campus on the Mouselight team. There, he learned about mouse brain anatomy by playing fancy connect-the-dots for 8 hours a day and a steady paycheck. When the pandemic hit and the carpal tunnel from tracing neurons all day got too much to handle, Ahmad decided to learn Python and became Mouselight's defacto data manager because no one else was going to do it. After a 3 year long journey at Janelia, Ahmad joined the Systems and Behavioral Neuroscience PhD program at UVA and was awarded an IDF fellowship, god knows why. Ahmad is now studying sensory processing at the Cang lab with a focus on natural image processing and computational neuroscience. He spends most of his time in a dark room recording from neurons and analyzing mountains of data that never seem to end. However, the struggle itself towards new scientific heights is enough to fill one's heart. One must imagine Ahmad happy.